You are here: Home1 / Single Vineyards 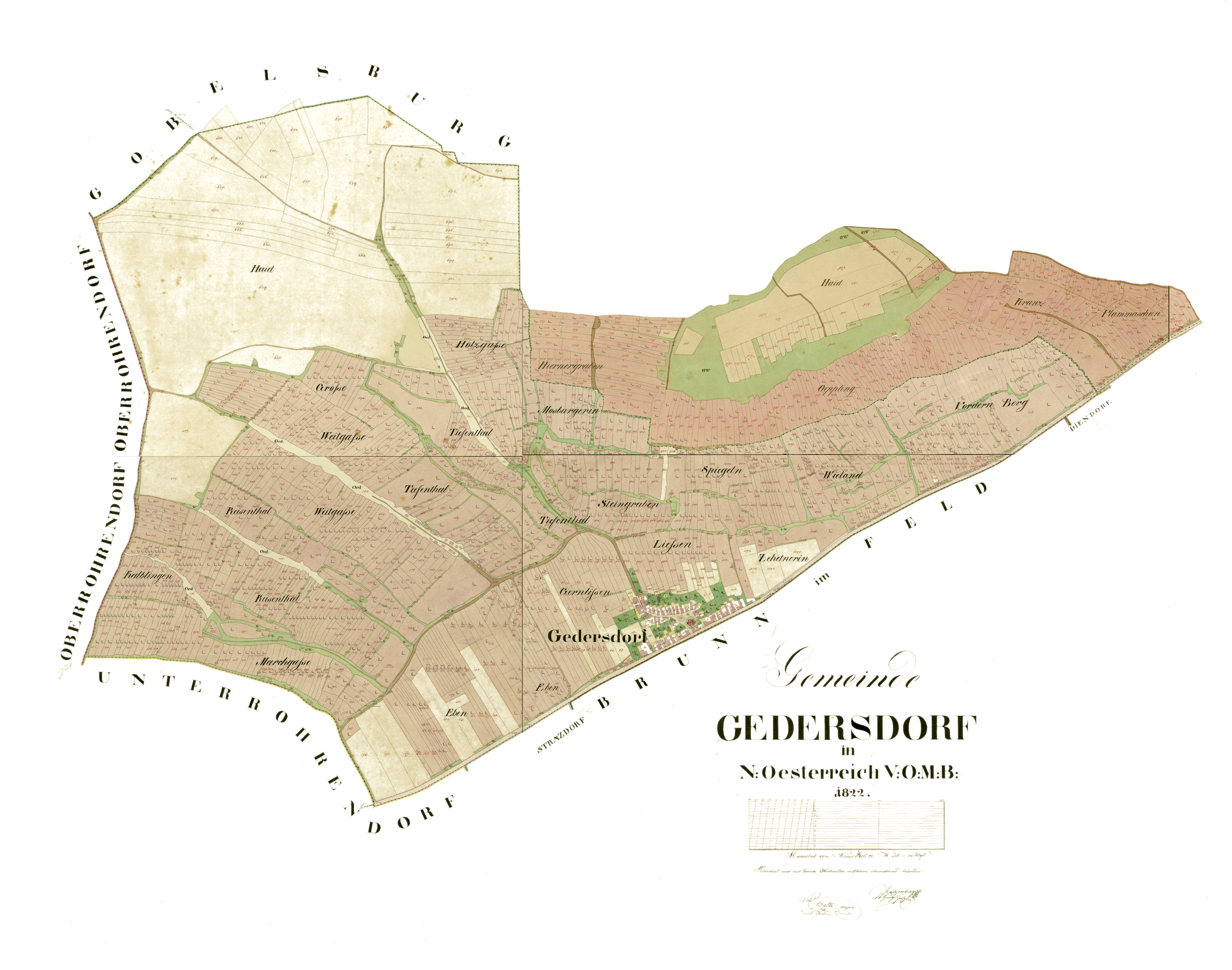 Der franziszäische Kataster (“The Original Map”) from which you can see the assembled four sheets of Gedersdorf is a special cartographic work. The decision on this detailed land survey is made under Emperor Franz I in 1817. He recorded the land according to size and use and formed – unsurprisingly – the basis for the tax collection. As you can see, at the time of the map creation, there were many more vineyards in the plain.

Since the year 1987 the single vineyards designation used in the cadastral map of 1822 is used on the label. Through the implementation of sub-sites we were also able to save most of the historic vineyard names, although they are often used for very small areas (partly less than 2ha).

Loess – rock and soil at the same time

The soil is usually the weathering product of the underlying rock. This is very different with the terraces of Gedersdorf. It is a sediment deposited by the wind, which has been standardized by working of top and bottom soil.

For a long time, geologists discussed the formation of this sediment. Because of the well-known loess areas in China, there was the assumption that it came from Gobi as well. This is where the anecdote by geographer and China researcher Ferdinand von Richthofen (1833-1905) fits in well: on his birthday, an album of his creative fields was to be given to him. Since the University of Vienna found no picture of the China Loess terraces, they handed him instead one of the Gedersdorf terraces..

The origin from gobi could have explained the uniform composition of grains of 0,02 to 0,05 mm in diameter. But a shipment over this enormous distance would be very unlikely? Meanwhile, there is a more conclusive explanation:

Our loess is a formation of the ice ages. The last ice age came to an end about 12,000 years ago. After the retreat of the glaciers large areas without vegetation remained and there were strong differences in the air temperature. The ice-free areas warmed up more than the icy areas and this caused strong and steady storms. The frost bursting and the inner friction of stone produced small clastic grains. These grains could be blown by the wind. It must have been sandstorms in the still vegetation less land. The dust was then deposited in the lee side of elevations of the land. The necessary elevation was provided by the Hollenburg-Karlstetten geological formation, consisting of psephit in Gedersdorf. Loess therefor was deposited by the wind – an “aeolian sediment” – and it comes from ancient river valleys.

The chemical analysis shows mainly quartz followed by calcite and mica. The content of lime has significant viticultural effects. Loess has little humus, so it is light. Iron oxide give him a tint of yellow.

The loess areas were heavily populated in the Stone Age. During the loess mining in Krems around 1900 – the material was used for dam construction on the Danube – more than 20,000 stone tools were found.

The grains of the loess are glued slightly together by lime – previously dissolved by water – and combine it very compactly, therefore it does not behave like sand in dunes. This property means that cellars without vaults and terraces without stone walls can be built. Our cellar is built in loess. There are two vaults stacked and above them there is the vineyard. This is a total of 10 meters loess, making it one of the most powerful loess deposits in Europe.

To loess vergin soil the soil scientists say Rigolboden. Through rigolen (= deep plowing) and also through the construction of terraces, the undoubtedly formerly existing humus layer was mineralized and so degraded. This was promoted by the high air content. The soil is uniformly yellow from above.

The present Pannonian climate has its name after the Hungarian lowlands (the Pannonia of the Romans). There are very big differences in temperature. It can be very hot in summer and very cold in winter. The rainfall is below 500 mm per year, which is very low.

As one can see here there is a rough separation into 3 zones: the high plateau, the terraces, the plain ot the foot of the mountain. The high plateau is only planted with vineyards since the 1930s. 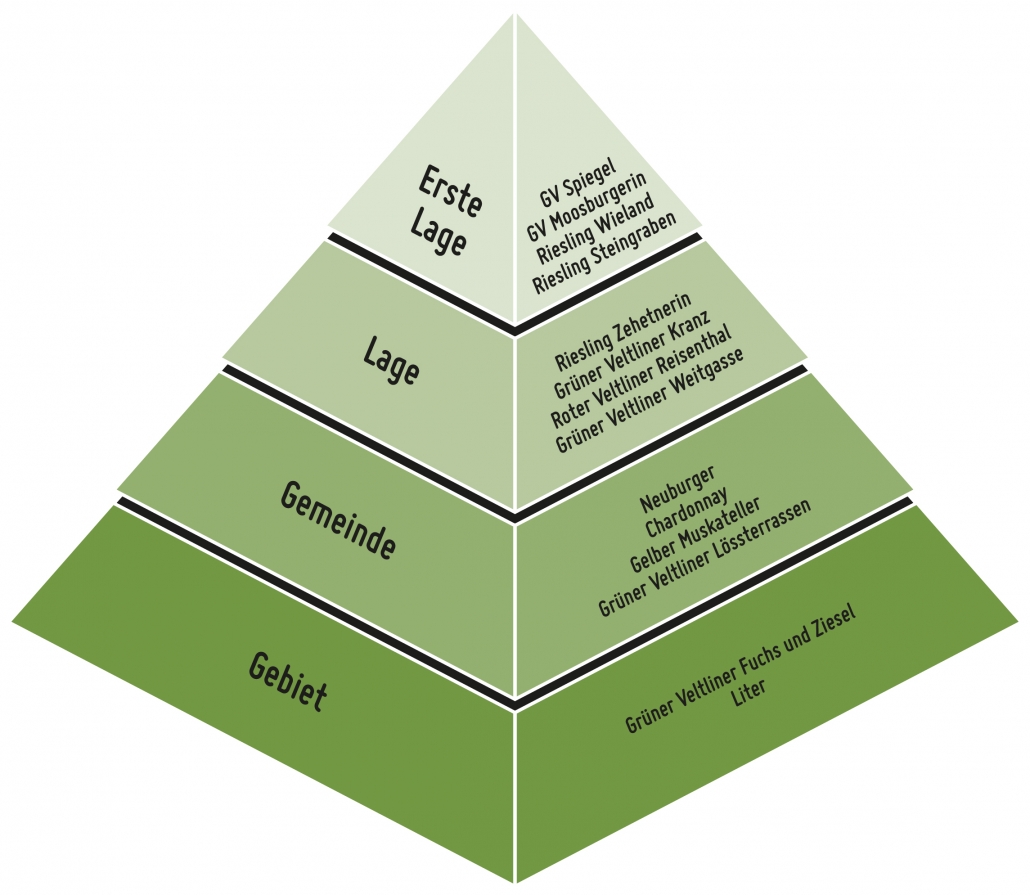 Not everywhere where vines are planted they are able to grow the same quality. It is common knowlegde under winemakers that there are vineyard sites that – with constant care – will bring extraordinary wines every year and other site that won’t be able to achieve great qualities. A few of the parameters that are curcial for a great vineyard site are known to us, but one may never look at them isolated from each other. A scarce soil on itself isn’t enough to produce remarkable wines. The interaction between soil structure, quantity of rain, wind, exposition, height and of course temperature during the year are all of great importance. To this day it is impossible to us to have a scientifically founded comparison and classification of terroirs across the world. Winemakers though, especially from families who worked the same vineyards for generations, normally know in which vineyard sites of their village the best and most characterful wines will grow every year. As varieties for Erste Lage we only use Grüner Veltliner and Riesling.

At the Mantlerhof we are very focused on single vineyard sites. We are not only focused on the grand sites like the Erste Lagen, but also on other sites, as every single vineyard has its very own character. We don’t want to miss out on these different characteristics. For this reason we produce nearly all our wines from single vineyards. Another reason is, that all our vineyards are quite distinct from each other: some are at the high plateau, some at the foot of the mountain in the plain and some are scattered through the terraces. The Kremstal DAC regulations in combination with a single vineyard name on the label require a minimum alcohol content of 12,5%, therefore some of our light wines are single vineyard but not DAC.

A couple of varieties are planted in similar vineyards quite close to each other, where it wouldn’t make much sense to produce each vineyard seperately. These wines are from the “Gedersdorf” origin.

For quality wines there is also the origin of Kremstal (as DAC for Grüner Veltliner and Riesling) and Niederösterreich (open to all varieties).

Due to the success of the Wachau colleagues with their brands, the then Managing Director of ÖWM, Wolfgang Lusak, came up with the idea of thinking about a brand also in our area.  Bertold Salomon, Edwin Jurtschitsch, Willi Bründlmayer, Sepp Mantler and others met for discussion in the cellar of Peter Dolle. A variety of brand suggestions were born … but ultimately the result was that we want to classify the vineyard sites. The founding of a club was decided. I argumented for the name “Traditonsweingüter”. The seal, which was developed at the suggestion of Willi Bründlmayer, is a symbol of orientation: stars, sun, moon, wind rose.

The single vineyard name can be found in different communities and often refers to the best location: etymological of “mirrors” or lat. “Spiculum” – means view. The location is in the middle of the mountain and has particularly thick loess terraces. Here grow powerful wines. The terraces belonging to the winery were planted with Grüner Veltliner in 1987 and 2014 selected by Josef Mantler. The rootstock is SO4, 5C and a small part on own roots.

A very small vineyard site. The name points to the monastery of Moosburg in Bavaria, which was secularized in 1803. The first mention as a vineyard was in the 9th century. It is our only vineyard on the mountain, which is created in dip direction. Grüner Veltliner clippings largely from own selection, partly from Aigner grafted on SO4.

Located just above the village of Gedersdorf, it is steep and almost arched like a burning glass, but well ventilated by the west wind. Only here you find pure loess and conglomerate – eponym to its name. This soil is found only about 100 m wide. Colloquially Steingraben was called “Dürnsteiner”. The oldest mention is from 1276 called Tyernstainer, derived from “dry stone”. The wine from this Lage is juicy and lasting. Riesling selections of various origins (E100, Geisenheim 239, Trier 68, Jamek) and rootstocks (SO4, 5BB, R27, 5C) in order to have as much diversity as possible. Planted in 1996.

It is one of the best single vineyards in the community. In the downhill part it is one of the few places where the conglomerate comes to daylight: here it is called Steindl, which means small stone. Due to higher terraces in the west, this site has little wind and therefore more noble rot. “Wieland” is a Riesling full of juice and opulence. The four terraces are planted with the classic Rieslings Geisenheim 356, 239 and various other German Rieslings, partially veredelt on 5C. But most of it is not known. Planting years are 1980, 1991 and 1993.

Our wines from Erste Lagen:

A vineyard formed like a basin just across the border in the municipality of Gobelsburg. The terraces are oriented south-east which is unique in our winery, as most other sites are facing directly south. The basin-form and the orientation give this site a very unique microclimate. Newly renovated in 2019, planted with Grüner Veltliner clippings from Spiegel in 2020.

In the mid of this site is a deep löss gorge. Old terraces facing south-southeast, pure Löss. Very exposed to wind and very dry. Here we have our Roter Veltliner initially planted here in the 1930s. Since 1955 Josef Mantler started selecting the best clippings from this vineyard. Current vines are from 1990, 2003 and 2004. Rootstock is SO4 and 5C.

These vineyard sites are situated on the high plateau or at the foot of the mountain. At the high plateau black earth dominates, Löss atop Danube gravel at the plains. Although situated in plain arreas these vineyards produce wines with a quite a lot of elegance and finesse. Especially in hot years these sites are very appealing as they are a little moister and later in ripnes. On the other hand they are more affected by frost events. Here we have vineyards with Grüner Veltliner, Riesling and Chardonnay.

Our wines from single vineyard sites: